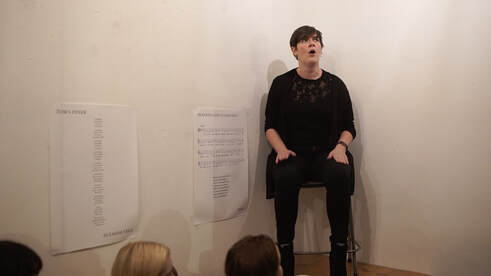 Rosie is an accomplished and experienced soprano. She studied at the Royal Welsh College of Music and Drama under the tutelage of Kate Woolveridge, and previously studied with Elearnor Forbes in Berlin.

As a choral singer, Rosie sang with BBC National Chorus of Wales for over 10 years, including two years as a student scholar. With the chorus, she has performed regularly at the Royal Albert Hall for the Proms, as well as St David’s Hall, Bridgewater Hall and many other distinguished venues across the country. She has also appeared on BBC television and radio. In Cardiff, Rosie sang with several local choirs, such as the RWCMD Chamber Choir, Newnam Hall Catholic Chaplaincy and Llandaff Cathedral.

As a soloist, Rosie has sung the soprano solos in several oratorios, including Brahms Requiem at St Martin’s in Dorking, Vivaldi Gloria with Canton Chorus in Cardiff, and Elijah with Athenaeum Singers in Warminster. She sang in the chorus of Opera’r Ddraig’s production of Dir Fledermaus and has covered Galatea in Handel’s Acis and Galatea, and Frasquita in Bizet’s Carmen.

In 2018 Rosie performed in newCelf’s Unaccompanied concert, premiering Marigold Blooming, a work for soprano by Gemma McGregor.
​
Most recently Rosie can be seen singing on Netflix’s drama series, Sex Education.